There are just under 50 items of new and enhanced functionality in Edgecam 2017 R1, covering turning, milling, wire EDM, machine configurations, and user experience.

The new 2017 release of Edgecam introduces a Tombstone module for assembling pre-existing parts on a defined mounting device. A simple dialogue window enables users to add pre-machined part files, specifying the positions they are to be mounted on a tombstone or other multi-component work-holding device. Once they are assembled, Edgecam automatically merges and rationalises all machining sequences by tool or index position and optimising the NC output into sub-routines.

Amongst the updates, Edgecam’s Code Wizard includes two highly significant enhancements in terms of machine tool configurations for lathes. When specifying Turret Type, the code wizard now supports Linear configuration. On this type turret tools are mounted in a linear fashion, across either the X, Y or Z axis and are largely used on Swiss-type machines, but in other normal configurations, too.

Radially and axial mounted tools are also supported, in both single and multiple spindle environments.

Another new feature is a sliding spindle or material, providing support for machines where the tool is static but the material slides in and out of the chuck or collet.

Having supported probing on mills for many years, the latest release of Edgecam introduces the same technology in the turning and mill-turn environment. Renishaw and m & h probing systems are supported, as well as a new Probe category in the Toolstore. Users can choose from a list of seven command cycles, all fully supported in the machine simulator. 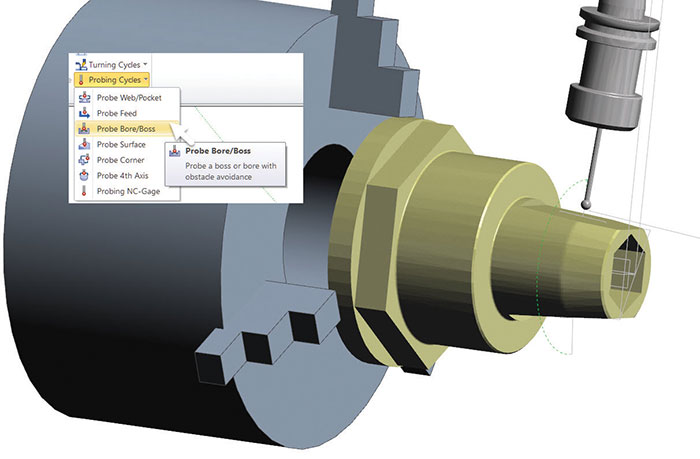 Several background enhancements not only improve picking/highlighting when working with solid files, but show improvements in speed and part file manipulation. These enhancements come about through improvements to Edgecam’s own internal engine, and by upgrading the OpenGL 3.3 technology.

The Update Fixture command has been enhanced to include optimised Indexing moves. “Previously, users had to pick a safe Index position for the whole sequence. Edgecam 2017 R1 removes this limitation, by automatically checking and correcting all Index Moves against stock and fixtures.”

Additional updates have been made to the Rough Groove cycle…this time to include canned cycle support, through a Canned Cycle check-box. A further enhancement in the turning environment sees most Turning Cam dialogues upgraded featuring pictures to define cycle functionality, which John Buehler says will be especially useful to new and infrequent users.

Users working with multiple components will gain significant benefits from two new features in the Insert Component command. “It’s now possible to insert separate machining sequences whereas in the past all sequences had to be inserted, which, in certain set-ups, wasn’t necessary. Also, CPL datum can now be selected from a simple drop-down menu.”

The need to create stock to run the Machine Simulator has now been removed. A new command in the Preferences section now defaults Edgecam to create stock automatically. When the system detects the absence of stock, it copies the component solid model, converting it to stock.

“This offers significant time savings where the user simply wants to check a finishing cycle, or is working with Probing cycles.”

Three new pieces of functionality have been added to the Profiling cycle. Cut Increment Stand Off, under the Links tab, gives control of the cutter’s position during passes. The Helical function now has a Supress Helical Clean Up Pass Offset option in the Multiple Passes function that determines the order of cuts. The Multiple Passes function now offers Cut By Offset, which allows the user to determine the manner in which the toolpath is distributed. 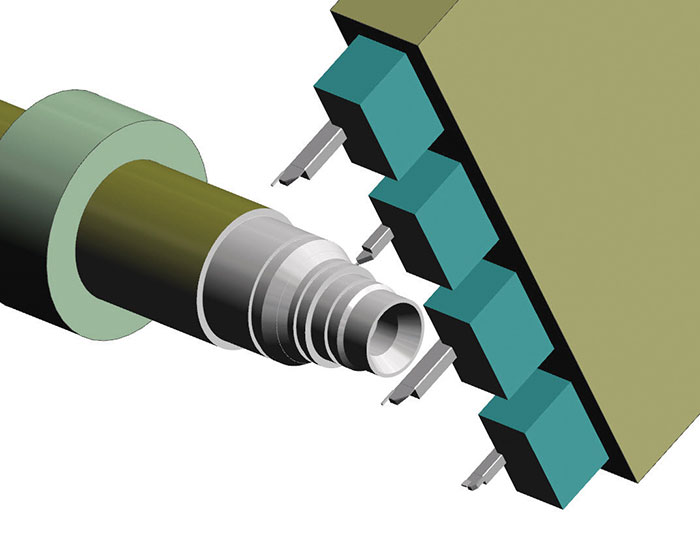 Numerous new features have been added to the Workflow and Planning Board automated machining commands leading to toolpaths being generated faster. Strategies are now applied to both main and sub spindles in the turning environment, instead of only in Main, meaning the strategies now support the Spindle Set-Up command by transferring the workpiece from the Main to the Sub Spindle. And the introduction of Hole Finish Method in the Options dialogue now allows Reaming to be specified as a method of finishing a hole feature by checking the hole’s finish attribute. A new Use Current Tool check-box in the Machine Feature option can force the strategy to use the current turning tool or milling cutter.

Session details have been added to Setup Browser and Rotational Handle on Dynamic CPL Marker within the Turning environment. John Buehler says these are ease of use enhancements.

“Specifically with turning, users will notice that the CPL Marker looks simpler by just displaying the X and Z markers. The new marker can be used to dynamically rotate, pan and translate the component. The Set-Up window has been split into two distinct panels – Session, which displays environment and material information, and Set-Up dealing with datum and positioning. And when loading multiple parts the Set-Up window will individualise each solid model and automatically add a new CPL datum, meaning each model can be scrutinised individually, and datum altered.”

There is no longer any need to programme Rapid To Toolchange and Rapid To Home commands when working with turning and mill-turn machines, as this can now be set as the default.

And finally, a new option of Mating Location has been added when CPLs are created, signifying a machining sequence datum…along with Machine Location when inserting components. The main benefit of this is to filter out unnecessary CPL datum while using the Insert command, Index command or the new Tombstone function.

Radan 2017 heralds start of major engineering functionality
Radan 2017, released recently by Vero Software, is the first step in the company’s attempt to change the CAD/CAM sheet metal manufacturing industries. With an emphasis on improving user experience for expert and novice users, this update promises to “reorganise how manufacturers will be using Radan in the future,” according to product manager Olaf Körner.

Changes that have been made allow Radmanager to create nests from different parts and different orders to minimise waste scrap. The process used to cut the parts will also be optimised by collecting data automatically and determining the best solution for production. 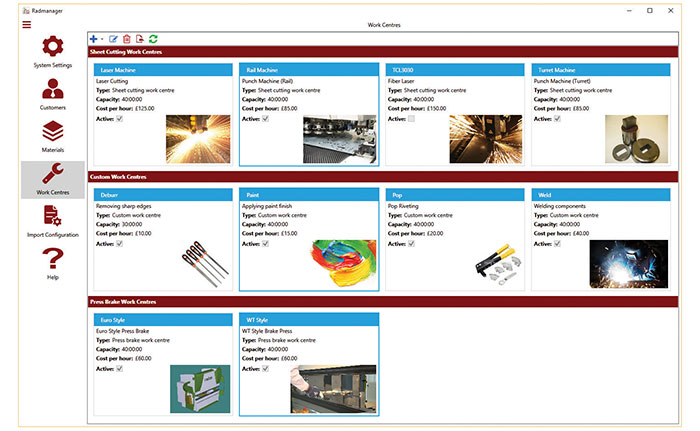 With the ability to manage the engineering of both 2D and 3D parts, Radmanager was designed to be a catch-all engineering system. Pick a part, any part. Radan Nest Editor allows you to edit a nest project, and navigating between projects got a bit easier

For example, a cut that would take a few minutes by laser could take up to two hours on a water jet. The upgraded algorithms allow for faster navigation and increased nesting. With updates to some old tools, the programme has been designed with the intention of being a time-saving and dependable software for the manufacturing industry.

Improved graphics and frame rate speed allow for a more fluid 3D experience – even on a tablet, and switching between top, side or front views has been made seamless. 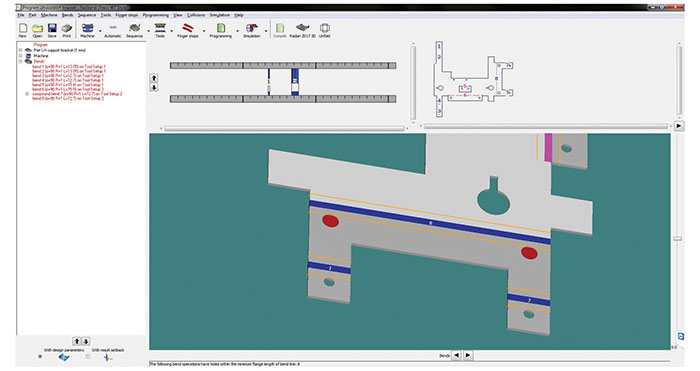 The Automatic Order Style Editor employs a simulation to improve upon the traditional text-based system used to communicate the path of the laser and accounts for floating scraps that are potential health and manufacturing hazards.

Nest projects are simple to create with templates. Navigating between projects has been improved in order to reduce redundant tasks that users previously experienced. Inside the software, multiple tools have been added or updated to increase productivity and efficiency. 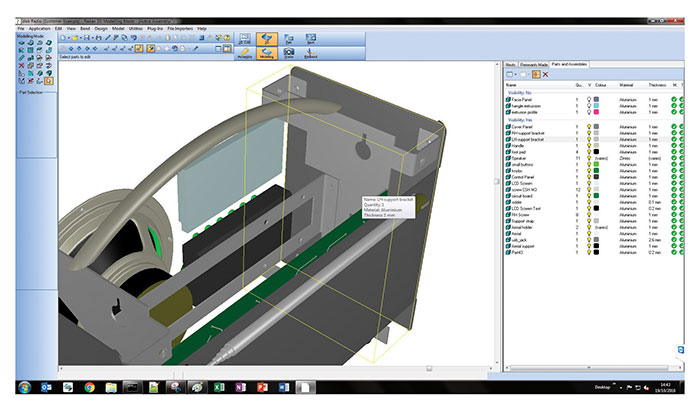 The profiling has been enhanced by improving autotooling routines used to place tags and for common cutting and clean cutting in scrap for the foil-cutting function. Radbend will now let users toggle between “Design” and “Result” values on holes and highlight areas where hole deformation might occur close to bends. Touchpoint TruBend, a multi-touch technology, will also be supported and gives industrial control to users, “as all Trumpf press brakes will move to this state-of-the-art controller.”

The increased control given to the user is just another step in the eyes of Körner. He believes that they are on their way to achieving great heights in automation by following the direction they’ve taken with the latest release of Radan.